What is gluten itself? It is a spare protein contained in cereals (wheat, rye, barley).

Celiac disease is a life-long, immune genetic disease characterized by gluten intolerance. The toxic gluten leads to the disappearance of small intestine villi, tiny protrusions of the mucosa that increase its surface and are responsible for the absorption of nutrients.

As a result of the toxic effect of gluten, food absorption is impaired, which leads to the occurrence of various clinical symptoms. The only treatment for celiac disease is to follow a strict gluten-free diet throughout your life.

Often times, people unjustifiably forgo gluten in their diets, which is costly and useless. The elimination of gluten from the diet is important only when we suffer from celiac disease, i.e. gluten intolerance, or when we notice gluten sensitivity.

3. Myth # 3: Celiac disease and gluten sensitivity are the same

The two concepts are often confused. Celiac disease is gluten intolerance. Gluten sensitivity are those cases of gluten intolerance in which, based on diagnostic tests, celiac disease and wheat allergy have been ruled out, and in which there is practically no atrophy of the intestinal villi, yet gluten consumption causes unwanted symptoms in the patient.

Gluten sensitivity mainly affects adults and is characterized by one or more symptoms, the most common of which are stomach pain, rash, headache, constant fatigue, diarrhea, flatulence, and weakness.

These symptoms usually begin within a few days or hours of eating foods that contain gluten. Initial American research indicates that this disorder may affect up to 6 percent. population. Thus, gluten sensitivity is much more common than celiac disease (about 1% of the population).

Is there really a relationship between losing kilos and not eating gluten? Unfortunately, that's a myth. It is the excess calories that is responsible for gaining weight, and gluten itself has nothing to do with it.

Processed products in which the gluten content does not exceed 20 mg per kg are also considered gluten-free and are marked with the international sign of the crossed ear. The offer of shops with gluten-free products includes gluten-free bread, pasta and flours. 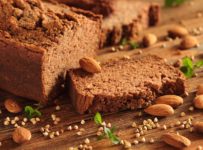